Solid State Logic System T at the Heart of the Houston Livestock Show and Rodeo, Featuring 22 Performers over 20 Consecutive Nights

Houston, Texas, July 26, 2022 — The Houston Livestock Show and Rodeo, also known as RodeoHouston, returned for a 90th anniversary celebration this year following a hiatus due to the coronavirus pandemic. The largest livestock exhibition and rodeo in the world, this year attracting 2.4 million attendees, RodeoHouston also presented 20 consecutive nights of concert performances, all captured through a Solid State Logic System T networked audio production console and fed from the stage to the music control room via a range of SSL digital transport solutions.

The SSL System T S500-48 console, powered by a TE2 Tempest Engine that supports up to 800 input and output paths with processing, is a new addition to the audio production setup at RodeoHouston, which takes place over three weeks across multiple indoor venues and outdoor locations at NRG Park in Houston. The Dante-based System T was installed in a music control room near the NRG Stadium, where the concerts are staged, shortly before this year’s events. 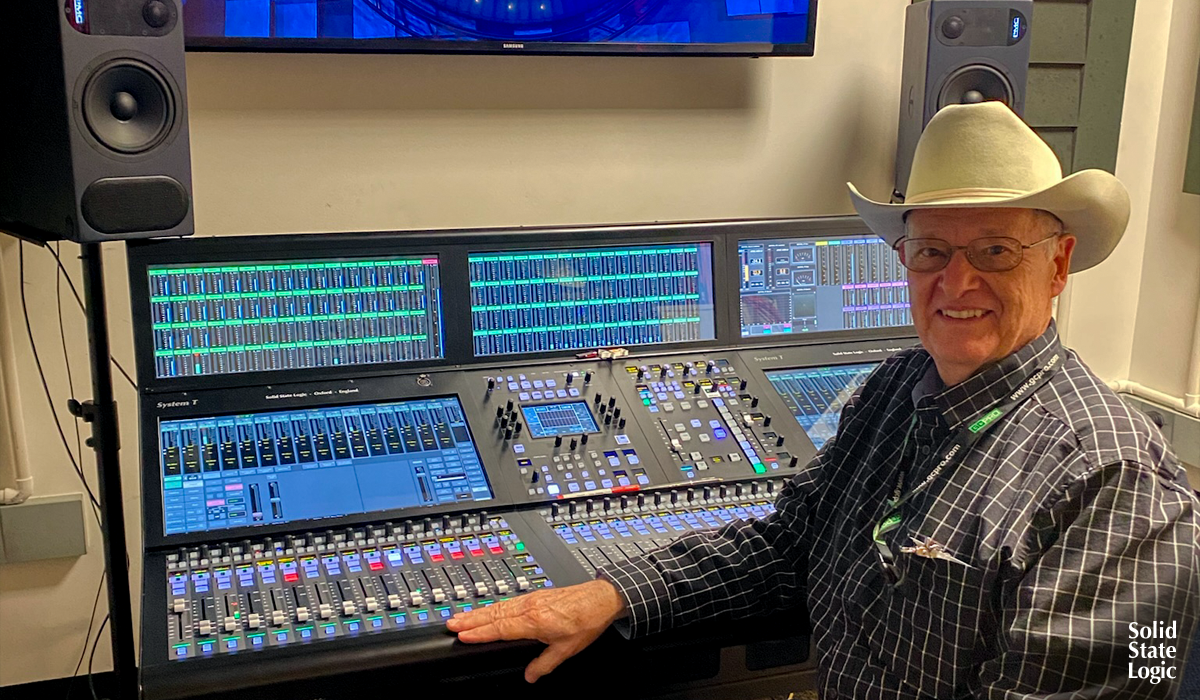 Malcolm Harper, owner and operator of Reelsound Recording, a Texas-based mobile audio recording service, was at RodeoHouston for his 28th time this year to mix shows by the 22 performers. “Solid State Logic’s System T S500 gave me every option to interface audio from each band with analog mic inputs, MADI Bridge and the SRC Dante units. The on-board effects and processing covered all my needs with the excellent sound SSL is known for,” Harper says.

Each year, Harper captures the concert performances to a multitrack recording system for the RodeoHouston archive. He additionally generates a stereo mix that is fed to the broadcast control room near NRG Stadium. From there, it is also distributed across the park to locations such as the NRG Center, NRG Arena, fairgrounds, livestock pens, shopping and dining areas and other public spaces. 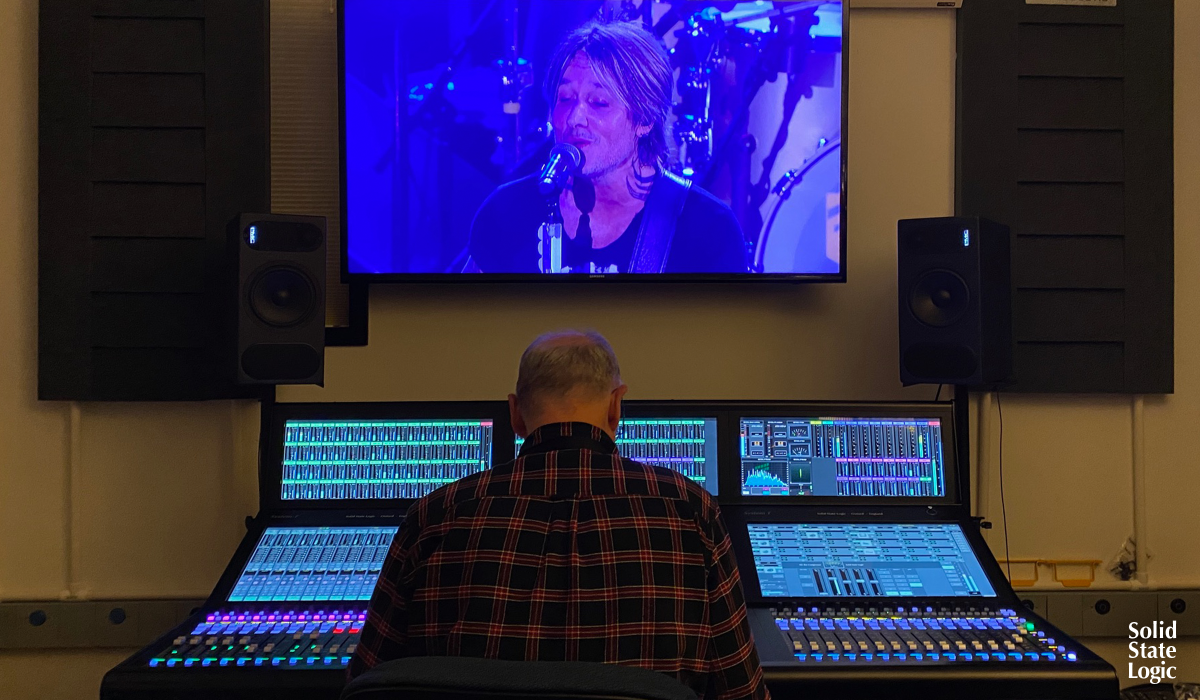 This year’s concert lineup offered music across a variety of music genres from artists including George Strait, Brad Paisley, Marshmello, Chris Stapleton, Khalid, Gwen Stefani, Dierks Bentley, Journey, Los Tucanes de Tijuana, Ricky Martin, Tim McGraw, Keith Urban and others. Houston-based country music artist Cody Johnson became only the third performer to sell out an opening night show at RodeoHouston, pulling in a crowd of 70,554 and going into the record books alongside George Strait and Garth Brooks. Strait broke his own RodeoHouston record with his 31st appearance, playing this year’s closing night to an audience of 79,452, only 650 fewer than his 2019 attendance record.

Each night’s concert at NRG Stadium follows rodeo competitions that take place on dirt trucked in and laid on the floor of the venue at the beginning of the three-week schedule. At the conclusion of each evening’s tournaments, an automated, motorized, 120-foot-wide stage in the shape of a five-pointed star moves into place with the night’s music production already set up. This year, to enable the transport of each artist’s audio from the stage to Harper’s music control room, connected by fiber optic cabling nearly a half mile away, SSL supplied a selection of its digital and analog interfaces capable of handling and converting a variety of formats. 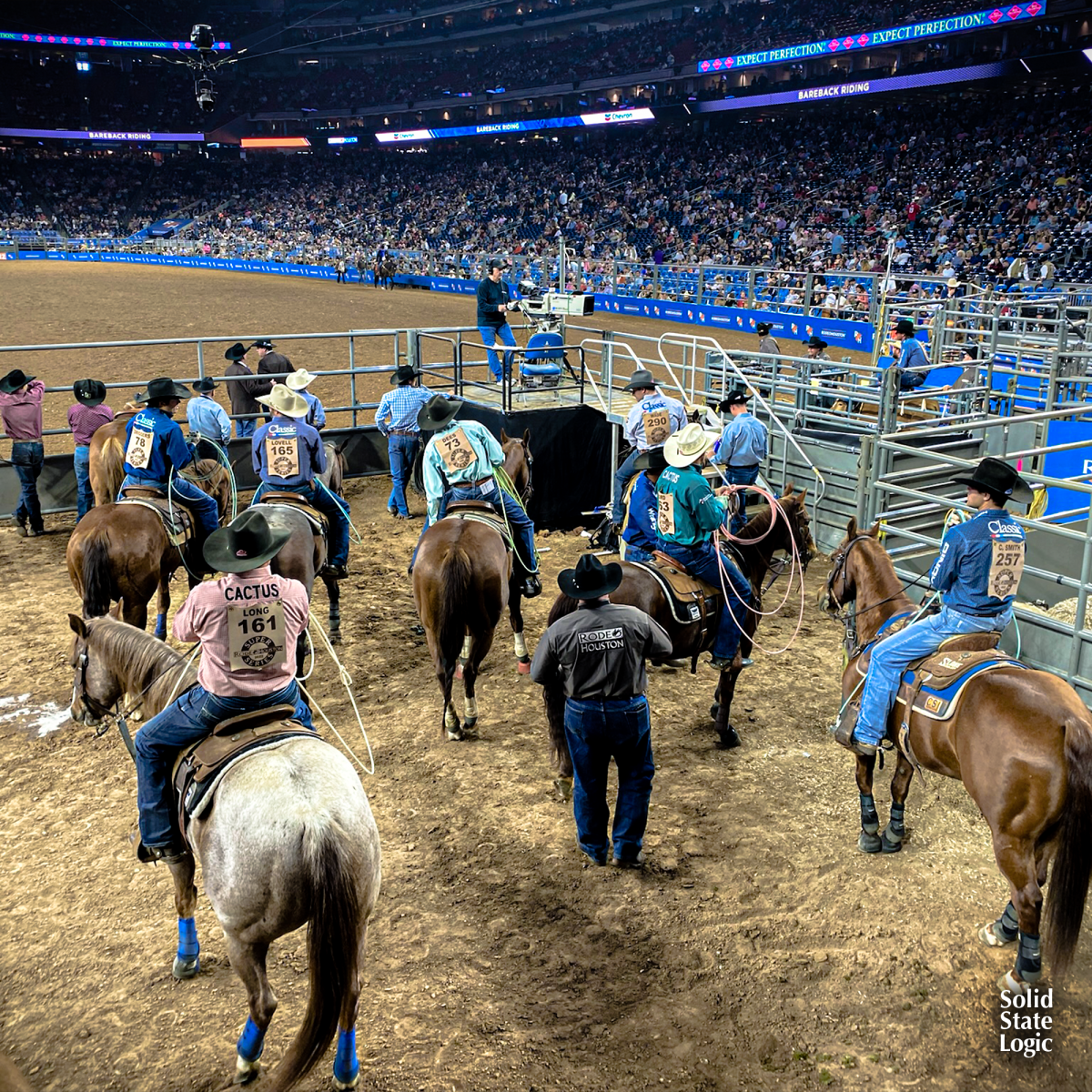 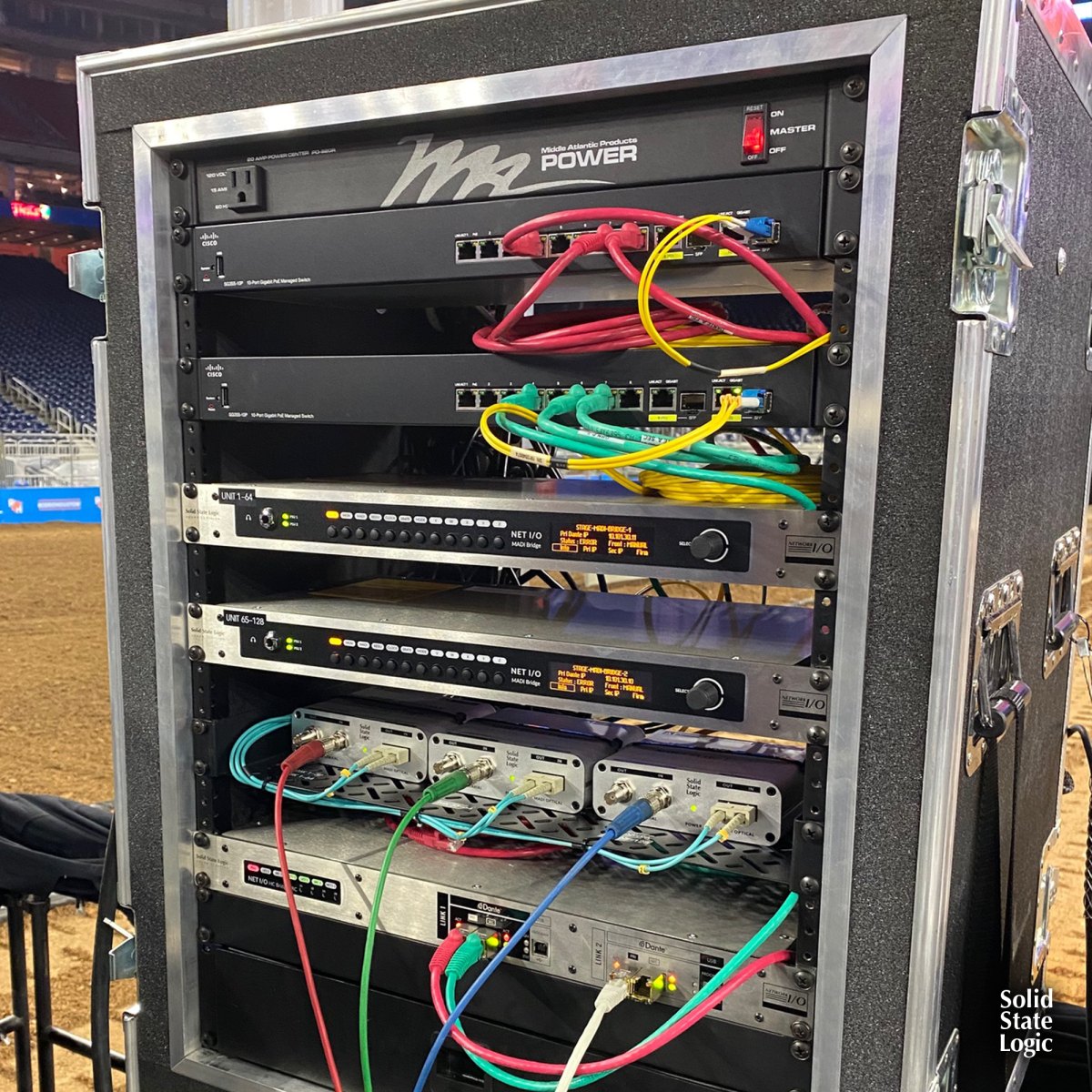 The ultimate in flexibility

“Part of the challenge is being ready for anything,” says George Horton, SSL’s Vice President, Western Region. “We don’t know what brand of console artists are going to come with, or what sample rate or flavor of split they’re going to provide.” To accommodate any eventuality, he says, SSL supplied several units from the company’s Network I/O line of products, which were housed in a rack at the side of the stage next to the monitor mix position and fed the System T over a single mode fiber link.

Two Network I/O MADI Bridge devices, with built-in sample rate conversion, were available to each accept 64 channels of 48 kHz audio, supporting a total of 128 inputs. Each MADI Bridge could alternatively take in two 32-channel streams at 96 kHz and combine them into a single 64-channel 48 kHz Dante stream, between them handling 128 channels of 96 kHz MADI if required, Horton says.

“We also provided an HC Bridge SRC, an optically-isolated Dante bridge. If someone came in with a Dante split, we could take up to 256 Dante channels at 48k or 96k,” he says.


As an analog option, Horton continues, “There was a 64-channel traditional copper split that was part of the umbilical from the stage to a rack room in the stadium. There, we had three SSL SB 32.24 stageboxes handling 96 mic/line inputs.”

Harper and the SSL team on-site during setup built a 128-channel template for the System T to accommodate 96 channels from the artist with the remainder available for various other inputs and feeds, believing that would cover any eventuality. But during the setup for John Pardi’s show, Horton says, “Malcolm called and said, ‘They’ve got 113 MADI sources. What do we do?’”

System T is built on patented Optimal Core Processing technology with an open architecture, rather than a more typical FPGA or SHARC-based design, allowing a user to reconfigure the console according to the project’s demands. The platform also includes TeamViewer remote control software integration. “So one of our support engineers remotely logged into the system, quickly rebuilt the template and Malcolm did the show without any problems,” Horton reports. 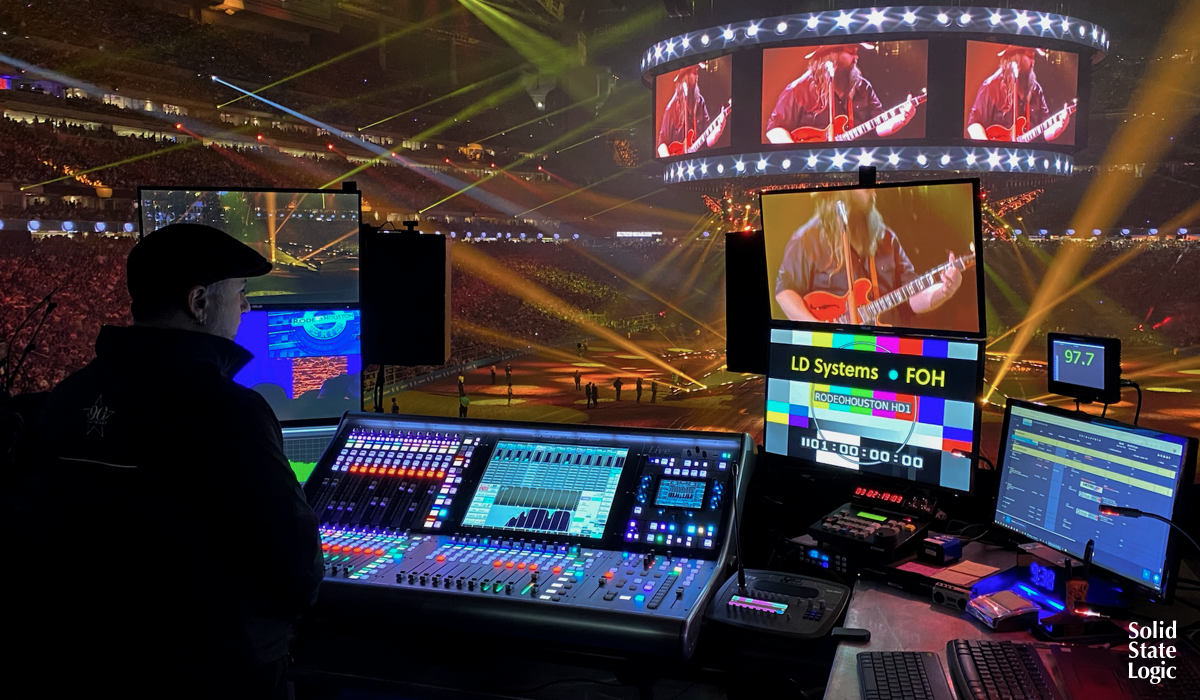 “The crew that runs this have been doing this for years,” Horton says of the team behind the RodeoHouston broadcast. “It’s so well organized and professional. They do a superb job.”

There was one final piece of SSL equipment on-site at NRG Stadium, Horton says. Houston-based live event production company LD Systems, a longtime technology partner with RodeoHouston, annually supplies an SSL Live mixing console as part of its audio production for the sound elements specific to the rodeo competitions. The audio crew for each night’s performer additionally provided a mix from their own control equipment to the L550 — which LD Systems upgraded last year to an L550 Plus — and that in turn fed the matrix out to the PA system and to other public areas.

Designed for fly-pack and OB audio applications, the S500m console delivers maximum control in a lightweight and reduced form factor.

The MADI-Bridge is a broadcast specification bridge between the MADI audio format and Dante. It is a bi-directional interface that can deliver…